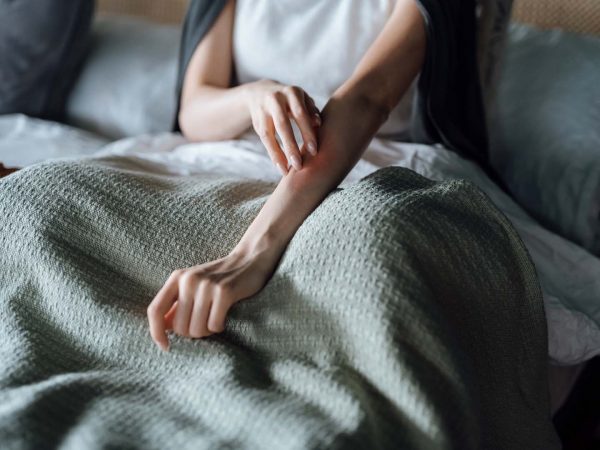 We usually think of allergies in terms of pets, pollen, and certain foods, but there are many, many things we can have allergic reactions to. It’s not as common as the sneezing and wheezing you might associate with more typical allergies, but urticaria (hives) after exposure to extreme cold may very well be an allergic reaction.

Being allergic to the cold has the same physical basis as other allergies – the regulatory compounds known as histamines, which have important signaling functions in the body, are released when the immune system mistakes a benign substance for a dangerous toxin. That trigger may be cat dander, tree pollen, or other common irritants that are not harmful but which in some people put the immune system on alert. The usual symptoms, sneezing and coughing, are the body’s attempts to expel the invader; the use of antihistamines, which counter the histamines, calm the reaction and make you feel better. Other types of allergic reactions can be far more serious – being allergic to tree nuts, dairy, or bee stings can sometimes cause life-threatening anaphylaxis that must be treated with epinephrine immediately. Hives are another type of allergic reaction. The hives that can appear in susceptible individuals after exposure to cold typically respond well to antihistamines, although some rare cases of anaphylaxis have been recognized.

An article published in 2018 reported on 50 patients in a Canadian allergy practice who were found to have cold-induced urticaria. The researchers found that hives could be provoked in a small area after exposure to an ice cube. Of this group, 90% of the patients responded well to non-sedating antihistamines, with the others needing stronger medications to alleviate their symptoms. Nearly a third of the patients had been advised to carry an epinephrine auto-injector as a precaution against anaphylaxis.

In most individuals with cold-induced urticaria, the reactions are local and limited to areas of the body exposed to extreme cold. The most serious dangers for those with this condition is that full-body exposure – such as swimming in cold water – could provoke anaphylaxis. In rare cases, just drinking a cold beverage could lead to suffocation if the throat swells.

It’s not clear what causes some people to develop cold-induced urticaria – there are some hereditary forms, but most cases are acquired. Women are twice as likely as men to develop the acquired form, which researchers theorize could be precipitated by a prior viral, bacterial, or parasitic infection. Fortunately, most people who develop cold-induced urticaria recover after four to five years.

I would suggest you talk with your health care provider about your hives, both to confirm that what you have is cold-induced urticaria and to determine if you should be carrying an epinephrine auto-injector.

Does Cold Weather Cause Heart Attacks?

Why Am I Always Chilly?

Looking for the very latest from Dr. Weil on a variety of topics, including healthy living, longevity, well-being, recipes, and healthy diets – as well as photos of his daily life, garden, and wellness travels? Follow along on Facebook and join the lively conversation! You can also find him on Instagram and Twitter.
Join The Conversation!