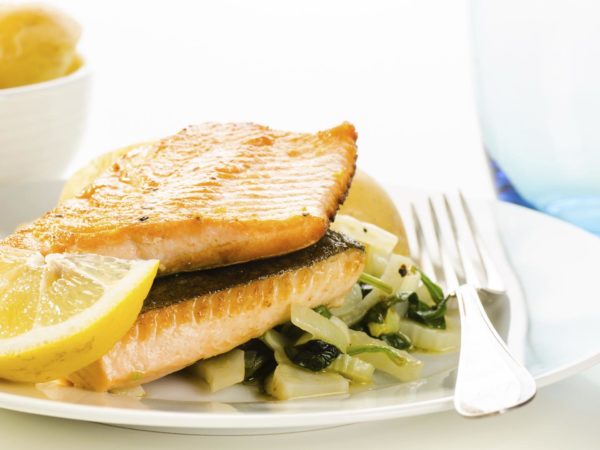 I like Arctic char. It is a flavorful pink-fleshed fish that is related to trout and salmon and resembles salmon, although it has a longer and more colorful body. True to its relatives, Arctic char tastes like a cross between salmon and trout (closer to trout), and it provides both carotenoids and omega-3 fatty acids. A 3.5-ounce serving gives you one gram of omega-3 fatty acids and 182 calories.

Most of the Arctic char we get in this country is farmed in Canada or Iceland (which produces most of the world’s farmed supply). Wild char, caught in Canada, Norway, Russia, Greenland and Iceland, is available for only a few weeks, in the fall.

Either wild or farmed Arctic char would be a suitable substitute for wild salmon. According to the Environmental Defense Fund, Arctic char, unlike farmed Atlantic salmon, are farmed in an environmentally responsible manner. Arctic char have been farmed commercially for less than 20 years, and about 3,000 tons are produced by fish farms worldwide (compared to approximately 750,000 tons of salmon). The fish must live in colder water than either salmon or rainbow trout and have a low tolerance for saline environments.

Since Arctic char is much less plentiful than salmon, it costs a bit more, usually ranging in price from about $9 to about $11 per pound. When buying this fish, bear in mind that the color of the flesh can vary dramatically from wild to farmed and even from one farm to another – it can range from dark red to pale pink. Look for fish with bright silvery skin with white or pink spots and a fresh, clean scent.

You should also be aware that Atlantic salmon from the wild is practically nonexistent as a result of over-fishing. All the Atlantic salmon you see at the supermarket or on restaurant menus is likely to be farmed. New research has found much higher concentrations of organic contaminants (PCBs, dioxin, etc.) in farmed salmon than in wild salmon. I do not recommend buying the farmed product until salmon farmers clean up their act.

How Dangerous Is Farmed Salmon?

A Better Kind Of Sugar?